Get 3.1 exercise solution
3-2. Suppose that the A input in Figure 3-52 is unintentionally shorted to ground (i.e., A 0). Draw the resulting output waveform.

3-3.*Suppose that the A input in Figure 3-52 is unintentionally shorted to the 5 V supply line (i.e., A 1). Draw the resulting output waveform.


3-5. How many different sets of input conditions will produce a HIGH output from a five-input OR gate?


3-7.*Refer to Figure 3-4. Modify the circuit so that the alarm is to be activated only when the pressure and the temperature exceed their maximum limits at the same time.


3-9. Suppose that you have an unknown two-input gate that is either an OR gate or an AND gate.What combination of input levels should you apply to the gate’s inputs to determine which type of gate it is?


3-10. True or false: No matter how many inputs it has, an AND gate will produce a HIGH output for only one combination of input levels.


3-11. Apply the A waveform from Figure 3-23to the input of an INVERTER. Draw the output waveform. Repeat for waveform B.


3-12. (a)* Write the Boolean expression for output x in Figure 3-53(a). Determine the value of x for all possible input conditions, and list the values in a truth table. (b) Repeat for the circuit in Figure 3-53(b). 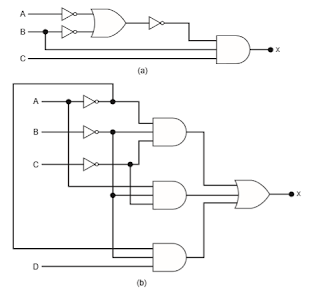 
3-13.*Create a complete analysis table for the circuit of Figure 3-15(b) by finding the logic levels present at each gate output for each of the 32 possible input combinations.


3-15. Create a complete analysis table for the circuit of Figure 3-16 by finding the logic levels present at each gate output for each of the 16 possible combinations of input levels.


3-16. For each of the following expressions, construct the corresponding logic circuit, using AND and OR gates and INVERTERs.


3-19.*Write the expression for the output of Figure 3-55, and use it to determine the complete truth table.Then apply the waveforms of Figure 3-54 to the circuit inputs, and draw the resulting output waveform.


3-21. Modify the circuits that were constructed in Problem 3-16 so that NAND gates and NOR gates are used wherever appropriate.


3-26. Simplify each of the following expressions using DeMorgan’s theorems

3-27.*Use DeMorgan’s theorems to simplify the expression for the output of Figure 3-55.


3-30. Show how a two-input NAND gate can be constructed from two-input NOR gates.


3-31. Show how a two-input NOR gate can be constructed from two-input NAND gates.


3-35. The circuit of Figure 3-55 is supposed to be a simple digital combination lock whose output will generate an active-LOW signal for only one combination of inputs. (a)*Modify the circuit diagram so that it represents more effectively the circuit operation. (b) Use the new circuit diagram to determine the input combination that will activate the output. Do this by working back from the output using the information given by the gate symbols, as was done in Examples 3-22 and 3-23. Compare the results with the truth table obtained in Problem 3-19.


3-38.*Determine the input conditions needed to cause the output in Figure 3-57 to go to its active state. 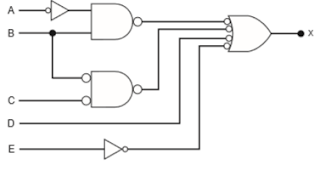 
3-41.*Figure 3-58 shows an application of logic gates that simulates a twoway switch like the ones used in our homes to turn a light on or off from two different switches. Here the light is an LED that will be ON (conducting) when the NOR gate output is LOW.Note that this output is labeled to indicate that it is active-LOW. Determine the input conditions needed to turn on the LED.Then verify that the circuit operates as a two-way switch using switches A and B. (In Chapter 4, you will learn how to design circuits like this one to produce a given relationship between inputs and outputs.)


3-43.*True or false: (a) VHDL is a computer programming language. (b) VHDL can accomplish the same thing as AHDL. (c) AHDL is an IEEE standard language. (d) Each intersection in a switch matrix can be programmed as an open or short circuit between a row and column wire. (e) The first item that appears at the top of an HDL listing is the functional description. (f) The type of an object indicates if it is an input or an output. (g) The mode of an object determines if it is an input or an output. (h) Buried nodes are nodes that have been deleted and will never be used again. (i) Local signals are another name for intermediate variables. (j) The header is a block of comments that document vital information about the project.


3-44. Redraw the programmable connection matrix from Figure 3-44.Label the output signals (horizontal lines) from the connection matrix (from  top row to bottom row) as follows: AAABADHE. Draw an X in the appropriate intersections to short-circuit a row to a column and create these connections to the logic circuit.
Get 3.44 exercise solution

3-45.*Write the HDL code in the language of your choice that will produce the following output functions:
X = A+ B
Y= AB
Z= A+ B+ C


3-46. Write the HDL code in the language of your choice that will implement the logic circuit of Figure 3-39. (a) Use a single Boolean equation. (b) Use the intermediate variables V, W, X, and Y.

2-3. What is the largest decimal value that can be represented by (a)* an eight-bit binary number? (b) A 16-bit number?


2-9. When a large decimal number is to be converted to binary, it is sometimes easier to convert it first to hex,and then from hex to binary.Try this procedure for 213310 and compare it with the procedure used in Problem 2-2(h).


2-18. How many hex digits are required to represent decimal numbers up to 1 million?


2-20. How many bits are required to represent the decimal numbers in the range from 0 to 999 using (a) straight binary code? (b) Using BCD code?


2-24. Represent the statement “ ” in ASCII code. Attach an oddparity bit.


2-28.*In a certain digital system, the decimal numbers from 000 through 999 are represented in BCD code.An odd-parity bit is also included at the end of each code group. Examine each of the code groups below, and assume that each one has just been transferred from one location to another. Some of the groups contain errors. Assume that no more than two errors have occurred for each group.Determine which of the code groups have a single error and which of them definitely have a double error. (Hint: Remember that this is a BCD code.)


2-32.*Fill in the blanks with the correct word or words. (a) Conversion from decimal to _____ requires repeated division by 16. (b) Conversion from decimal to binary requires repeated division by _____. (c) In the BCD code, each _____ is converted to its four-bit binary equivalent. (d) The _____ code has the characteristic that only one bit changes in going from one step to the next. (e) A transmitter attaches a _____ to a code group to allow the receiver to detect _____. (f) The _____ code is the most common alphanumeric code used in computer systems. (g) _____ is often used as a convenient way to represent large binary numbers. (h) A string of eight bits is called a _____.


2-38. In an audio CD, the audio voltage signal is typically sampled about 44,000 times per second, and the value of each sample is recorded on the CD surface as a binary number. In other words, each recorded binary number represents a single voltage point on the audio signal waveform. (a) If the binary numbers are six bits in length, how many different voltage values can be represented by a single binary number? Repeat for eight bits and ten bits. (b) If ten-bit numbers are used,how many bits will be recorded on the CD in 1 second? (c) If a CD can typically store 5 billion bits, how many seconds of audio can be recorded when ten-bit numbers are used?


2-39.*A black-and-white digital camera lays a fine grid over an image and then measures and records a binary number representing the level of gray it sees in each cell of the grid. For example, if four-bit numbers are used, the value of black is set to 0000 and the value of white to 1111, and any level of gray is somewhere between 0000 and 1111. If six-bit numbers are used, black is 000000, white is 111111, and all grays are between the two. Suppose we wanted to distinguish among 254 different levels of gray within each cell of the grid. How many bits would we need to use to represent these levels?


2-40. A 3-Megapixel digital camera stores an eight-bit number for the brightness of each of the primary colors (red, green, blue) found in each picture element (pixel). If every bit is stored (no data compression), how many pictures can be stored on a 128-Megabyte memory card? (Note: In digital systems, Mega means 220.)

1-1.*Which of the following are analog quantities, and which are digital? (a) Number of atoms in a sample of material (b) Altitude of an aircraft (c) Pressure in a bicycle tire (d) Current through a speaker (e) Timer setting on a microwave oven

1-7.*What is the maximum number that we can count up to using 10 bits?

1-8. What is the maximum number that we can count up to using 14 bits?

1-14. How is a microprocessor different from a microcomputer?

1-15. How is a microcontroller different from a microcomputer?